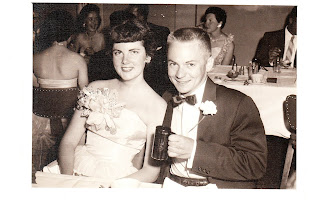 HOW I MET MY HUSBAND IN THE FABULOUS FIFTIES!
BETTY AND CHUCK AT A SORORITY DINNER
PEPPERDINE COLLEGE
LOS ANGELES, CALIFORNIA
1958

The 1950s were a great time to be a teenager. By now, everyone knows that era was characterized by hot rods and rock and roll. Elvis Presley was shaking things up for teenage girls and my friends would swoon at the mention of his name. The sound of revved, souped-up engines was a battle cry for high school guys. Naturally, our parents thought our clothing, hairstyles and fads were awful.

Moms were mostly the stay-at-home variety. While taking care of the kids, they did the housework, cooked the meals and helped out at the school’s PTA. Sometimes, they took a break in the morning to buy a jelly donut from the Helm’s Bakery truck and have coffee with their nearby gal pals. In the afternoon, they often watched “Queen for a Day” on TV until the kids got home from school. Thus the middle class was born.

I was one of the products of that era—a baby boomer teenager. I wore sweet little sweater sets and plaid skirts to school with white buck shoes. On really special occasions I wore one of the infamous poodle skirts with a starched petticoat. I was a serious student and Concert Mistress of the orchestra when I wasn’t talking on the telephone (AX-13756), listening to the radio or reading movie magazines about actors like James Dean and Grace Kelly.

Chuck, my soon-to-be boyfriend, lived on the other side of town. He drove a cool 1949 Ford with a full-race engine that sported several different coats of primer. He and his buddies were the forerunners of the Fonz. They had gelled crew cuts and dressed in rolled up Levis and white tee shirts. They were way more interested in hot rods than school. On weekends, they took their dates home by midnight and headed out to the Lion’s Drag Strip in Long Beach or Hollywood & Vine to listen to the latest records while watching the parade of cars.

We girls were not allowed to date until our 16th birthday. We all thought it was a cruel rule but no one ever challenged it. My first date was with an “older” man (a high school graduate!) and he took me to the Hollywood Bowl in his father’s nice car. Wow. Did I ever feel grown up! I’m still amazed mother let me go with him.

I met Chuck at a big inner city church. He and his buddies came for the gymnasium basketball court. It was a little slow but he finally asked me out after I had dated all of his friends. Today’s teens have Facebook. We had church socials. In the summer we had pool parties or went to the beach. In the winter, one of our favorite places was the huge roller skating rink in Culver City. At school there were football games and proms. We went to them all and Chuck will tell you that he knew more people at my school than he did his.

Outside of church, we did a lot of double dating but they were nothing like you see on TV. No “Dirty Dancing” scenarios. Early on, getting to know one another included a long drive (no freeways!) up to a drag race in Goleta. To this teenage girl, the event was loud, dirty and boring. That was my first and last official drag race event. Ever.

One of our first and most expensive dates was in 1956. That was the summer after Disneyland opened. Three carloads of us headed into Anaheim from L.A. along surface streets to Firestone Blvd and a day of fun. Remember, there were no freeways.

We rode rides non-stop until it was dark. As soon as the fireworks were over, we quickly left to get me home by midnight. Of course, Chuck’s car broke down. This was a common occurrence! He pulled over by the side of the road under a street light. The other guys jumped out of their cars and they all went to work repairing the Ford’s carburetor. Soon we were on the road again and I made it home in time to beat my curfew.

Otherwise, our dates consisted of picnics at the park, going to the movies and once in awhile a restaurant for dinner. He was always a working teen and saved his money in one of his dad's cigar boxes. I knew he could afford a car and me while going to school as long as he delivered the L.A. Times!

The Yum Burger was our favorite diner. Located on Manchester Blvd. it was famous for its logo of an American Indian brave—a cultural icon that would now get it shut down! Nickels and dimes powered the jukeboxes on the tables. The burgers, fries and ice cream shakes were about 35¢ each. The walk-in movie’s comfortable, rocking loge seats were 50¢ and ice cream at Scrivener’s Drive-In was about 24¢. My, how times have changed.

Ultimately, we graduated from our respective high schools. Chuck proposed marriage with a cigar band and promptly joined the U.S. Army Reserve. I worked at the Broadway Dept. store as an elevator operator to save up for our wedding while attending Pepperdine College. Finally, on Nov. 1, 1958, we married at St. Mark’s Methodist Church in Inglewood, Calif. And the rest, as they say, is history!

Those early days are the times that memories are made of. But my love for the 1950s has nothing to do with Elvis or hot rods and everything to do with the man I married.

Betty Kaiser’s Chatterbox is about people, places, family, and other matters of the heart.

Posted by Betty Kaiser, columnist at 8:00 PM No comments: