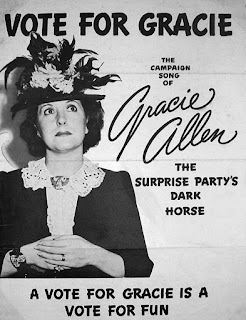 The campaigning to become president in 2016 has been in full swing too long. It’s a slight exaggeration to say that dozens of candidates began testing the waters years ago. Finally, all but two have washed out. Across the board, it was a peculiar election slate of wanna-be candidates to say the least.

The sparring of so many candidates left me more confused and crabby than informed. Finally, former Secretary of State Hillary Clinton prevailed on the Democrat side. Billionaire Donald J. Trump, who was originally just a speck on the candidate horizon, ultimately gained the Republican nomination.

Personally, I long for the good old days of candidate selection. In election years, I remember my grandfather sitting and listening to the results of the DNC and RNC National Conventions on the radio. He would listen intently as the conventions announced their select candidates to the nation. In those days they elected individuals with solid credentials like Harry Truman and Gen. Dwight Eisenhower. As a youngster, the process seemed relatively simple.

Presidential campaigning is serious big business, Very serious. Our country’s future hangs on every word of potential nominees as they try to come up with solutions to the mega problems facing us. It’s not possible for anyone to have all the answers. Yet we seldom hear candidates say they don’t know the solution to a situation. Lots of arrogant pontificating goes on. Not much humor is displayed.

Back in the day, humorous pseudo candidates would often surface and lighten up the whole process. In the early days of radio, Eddie Cantor and Will Rogers made slapstick runs at the White House. Now TV’s Saturday Night Live brings a little levity to the proceedings.

One of the funniest comedians to address political comedy was ditzy Gracie Allen. She and hubby George Burns were comedic stars of radio, stage, screen and television. Burns was the straight man who wrote the material but the audience loved silly Gracie and her earnest delivery of skewed answers to Burn’s serious questions.

In March 1940 on the Burns and Allen radio show, Gracie announced that she was forming a new political party and declared her candidacy for president. War was simmering across Europe; times were grim and getting worse. This was the era of Franklin D. Roosevelt and Thomas E. Dewey. Laughter was in short supply.

Gracie’s new political party was called “The Surprise Party.” After all, she said, her mother was a Democrat, her father a Republican and she was born — A Surprise!

Gracie made unannounced appearances on many radio shows to offer her views on the issues of the day. One day she could be found at Fibber McGee and Molly and the next on The Jack Benny show. When Ken Murray, host of The Texaco Star Theatre, asked her which party she was affiliated with, she answered in typical Gracie form: “I may take a drink now and then, but I never get affiliated.”

Eventually she and George crossed the country on a whistle-stop campaign tour. They promoted her book “How to Become President” and performed their radio show live from Hollywood to Omaha. There, at the Surprise Party Convention she was nominated for president of the United State.

When asked what made her qualified to run for president she said, “…let me tell you that women are getting very tired of running a poor second to the Forgotten Man and with all the practice we’ve had around the house the time is ripe for a woman to sweep the country. I’ll make a prediction…that a woman can and will be elected if she is qualified and gets enough votes.” Gracie continued adlibbing as she shook hands and kissed babies. She garnered a few hundred votes and tens of thousands of smiles — which is all she really wanted.

Fast forward a few years and another Hollywood face entered the political arena. Pat Paulsen was a long-faced comedian and satirist who was well known for his hilarious monologs on The Smothers Brothers Comedy.

Paulsen was approached by the Smothers Brothers to run for President in 1968. He is reported to have said, “Why not? I can’t dance; the job has a good pension plan and I’ll get a lot of money when I retire.”  His slogan was “Just a common, ordinary simple savior of America’s destiny.” Sounds a little familiar!

Viewers would tune in to listen to his campaign promises that were outright lies and tongue-in-cheek attacks on the major candidates. His so-called campaign was comedy based and a big hit. The long-faced comedian’s response to any and all criticism was “Picky, picky, picky.”

Tongue in cheek, Paulsen addressed issues that we still face today:
Problem solving: “I will not claim to solve all the world’s problems. If I did, I’d have to run as a Republican or a Democrat.
Gun laws: “A gun is a necessity. Who knows…you might be walking down a street and spot a moose!”
National Debt: “Will I obliterate national debt? Sure, why not?”
Immigration:  “All the problems we face today can be traced to an unenlightened immigration policy on the part of the American Indian.”

To everyone’s surprise, his pseudo campaign took on a life of its own. In the 1996 New Hampshire Democratic Primary, Paulsen polled 921 votes to President Clinton’s 76,754. He came in second place! Ultimately he ran five campaigns with gentle humor aimed at political arrogance until he died at the age of 69 in 1997.

Don’t be a monkey! Get informed and vote intelligently! As for me, I’m with Gracie (and Pat). Truth goes down best with a little laughter.


Betty Kaiser’s Chatterbox is about people, places, family, and other matters of the heart
can be seen in the Cottage Grove Sentinel

Posted by Betty Kaiser, columnist at 12:00 PM No comments: