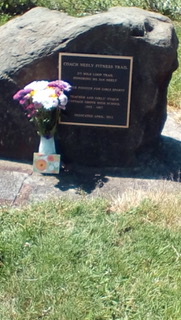 Today’s column is one of fond remembrances of Jan Neely, a beloved girls Athletic Coach and teacher who taught at Cottage Grove High School from 1952-1987. A Christian, she passed from this world into heaven on June 16, at the age of 92. Her former students and co-workers will tell you that she is gone but not forgotten. Their memories inspired this column.

She still means a lot to her students and coworkers. For-instance, if you walk around the Cottage Grove High School campus, you will find yourself on the Coach Neely Fitness Trail. A plaque was placed there in 2012 in honor of this very respected teacher by a group of her former students. At the dedication, she had a personal tour of the trail in a golf cart.

Janice Jean and her twin sister Jean Janice were born on June 16, 1927 in Grant’s Pass, Oregon. They both graduated from the University of Oregon and later earned master’s degrees from the University of Washington. They both taught women’s physical education. Jean lived in La Grande for 30 years where she was a teacher at Eastern Oregon College until she retired and moved to Cottage Grove with Jan. She passed away in 2009.

Former Athletics Director Jerry Braunberger was fresh out of college when he came to CGHS in 1961. He and his wife Sherrie fondly remember Jan’s warm greeting and acceptance of them. Soon Jan was organizing activities for the faculty wives—most memorably, a weekly badminton group that continued for years. Sherrie remembers that “Jan set up the group and taught us how to play but she was heard to beat!”

Jerry said he really got to know her when they coached track together (along with softball, soccer, Lacrosse, etc.) He stressed that she was well-liked and developed strong relationships with her students. Whatever she did, her emphasis was always on the importance of physical activity for all ages. She would encourage all ages to exercise by saying, “You need to be active for a busy life,”

Jerry said that Miss Neely was an equal opportunist for women in sports—even in an era when girls’ sports in school were far less important than the boys, He added that “She was an excellent teacher and extremely dedicated. She was a dynamo!”

After hearing from graduates of several CGHS eras, it’s evident she coached, taught, mentored, encouraged, supported and motivated her students all while teaching them new skills. I think it’s fair to say that she was a super star teacher to her students. One with a sense of humor.

As you will learn from the following comments about their “Miss Neely,” you might also say that she taught with love.

Cheryl R. from the class of 1966 says: “Growing up there were three women who deeply influenced me: my mother, my paternal grandmother and Miss Neely. She was not only a wonderful teacher, coach and advisor, but also a wonderful role model to me and to hundreds of young women. She always inspired us to do our best and be our best version of ourselves. I know I am a better person for having her in my life."

Janece N., also from the Class of 1966, said..."I have wonderful memories of Miss Neely...definitely a woman before her time!"

Jan S., also from the Class of 1966 says: “My memories include powerful words to describe the role model she was for me...dedicated, motivational, positive influence, genuine, caring, and she paved the way for girls’ athletics by the way she positively interacted with people. She provided an unbelievable experience in physical education with curriculum involving basketball, volleyball, tennis, softball, gymnastics, fencing, archery, etc. I chose elementary teaching for my life long career and Miss Neely was a definite inspiration and role model in my life!”


One member of the class of 1959 recalls how kind and caring Miss Neely was while her PE teacher. It was this teenager’s senior year. She fell in love, got married and became pregnant. Morning sickness made it impossible for her to keep up in soccer. Miss Neely noticed, didn’t ask questions but suggested that her student “Go sit on the sidelines and learn by watching.” Now that’s teaching with compassion.

Finally, Marie L. (class of 1957), has some hilarious stories of trips that the various teams took to out of town sporting events. There were no buses for girl athletes so parents and Miss Neely did the driving.

To pass the time, the girls would come prepared with prankster signs to flash out the back window. A couple of their favorites read, “Help! We’re being Kidnapped!” or “Single Driver.” They were afraid to put up the one that said, “Drunk Driver.”

As they giggled, Miss Neely would just say, “What are you girls doing now?” and keep on driving to the next GAA meet.

Today, all agree that they are grateful for having known her. She was an excellent teacher, mentor, role model and friend who greatly influenced their lives forever. There were many formal accolades and awards for her but as one former student said, “She was a pistol and got things done!

Now you have to wonder what kind of athletics she is organizing in heaven!

There will be a Celebration of Life service for Miss Janice Jean Neely at Riverside Community Church of God, Saturday, July 20, 2019 at 2 pm.